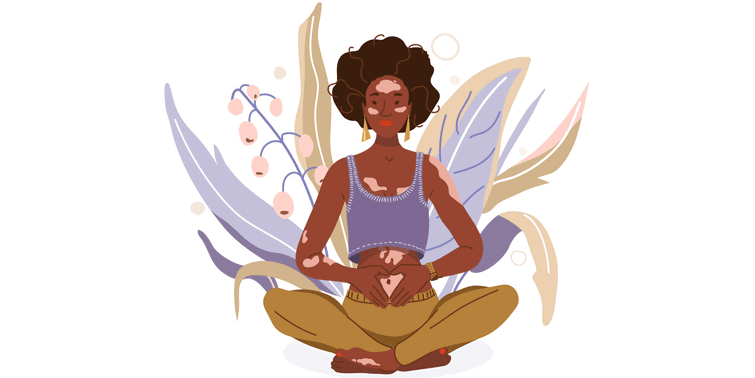 Vitiligo is a skin condition characterized by the evident appearance on the epidermis of white patches. This occurs because in vitiligo, in certain areas, the pigment-producing cells, known as melanocytes, are damaged. The patchy depigmentation of the skin is responsible for the stigma that adversely affects patients’ self-esteem and quality of life. The patches of skin affected become white and typically include sharp margins.

The hair on the skin might become white as well. It can additionally include the inside of the nose and mouth. It typically affects both sides of the body. Treatment might enhance the skin appearance, but the disease will not be completely recovered. It is estimated to affect about 0.5 percent of the population worldwide, according to 2018 reports, while the prevalence in India is about 1.13 percent.

The exact cause of Vitiligo is yet unknown. However, several factors may play a role.

The disease affects both genders equally and can appear at any age. However, the average age of onset varies based on the geographical location, which is around 22 years in India and the United States. Patients with vitiligo and their relatives bear an increased risk of developing autoimmune diseases like autoimmune thyroiditis, type 1 diabetes, pernicious anemia, and Addison’s disease.

The symptoms of vitiligo develop gradually but are usually visible as the person is able to identify the patches of skin where it is considerably lighter than the rest of the areas. It is not necessary the condition spreads throughout the body. Vitiligo could remain localized in a particular area of the body as well.

In addition to medications, there are various dietary, and lifestyle changes that will assist you manage vitiligo effectively.

Diet
Experts and dermatologists suggest certain nutritional deficiencies can worsen vitiligo. This is why it is suggested that one must include foods abundant in Vitamin B-12 in their diet. Its deficiency increases the level of homocysteine, which can cause damage to the pigment-producing cells in the skin. Foods containing Vitamin C (kiwis, strawberries, oranges, amla) can also help to promote cell repair and cell production.

Skincare
Make sure your skin is adequately secured from the harmful rays of the Sun. Utilize ample amounts of sunblock lotions on your skin and especially the troubled areas. Apply sunscreens at least 15 minutes prior to stepping out in the Sun. Use umbrellas, hats or more clothing to prevent direct contact of sun rays with the skin.

Home Remedies
The good old kitchen remedy of applying a mixture of mustard oil and turmeric is reasonably popular for the treatment of vitiligo. This mixture needs to be washed after 15 to 20 minutes. Coconut oil is equally used as a natural remedy to reduce the skin patches and aid re-pigmentation.