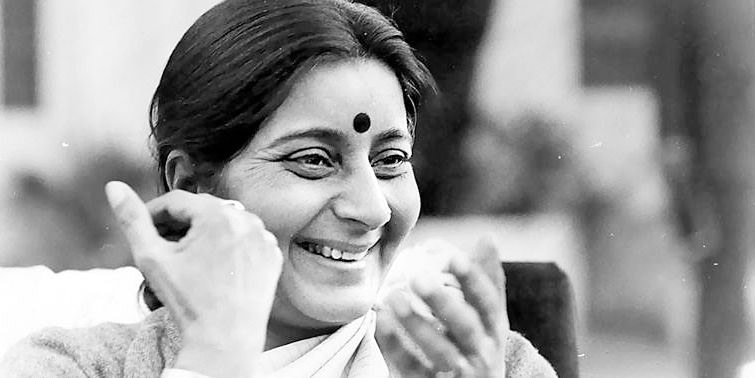 Sushma Swaraj: Glorious Chapter In India And Indian Politics Comes To An End Leaving A Legacy

Former Union Minister of Foreign Affairs and BJP politician Sushma Swaraj passed away on Tuesday night after a cardiac arrest. The politician, who was 67 at the incident had not contested the 2019 Lok Sabha election because of health reasons.

She was loved and appreciated by all of her easy accessibility, and during her tenure as the Foreign Minister, she helped a lot of Indians in crises abroad with her quick decisions. She is credited with turning a rigid ministry into one which helped its people.

Parliament’s speech in 1996 was when Swaraj stood up to speak out against the movement of no confidence. After Atal Bihari Vajpayee had to resign from the post of the Prime Minister, she scoffed at her political opposition.

In the midst of a roaring house, Swaraj set the foundation for what has become one of the country’s most landmark actions since Independence.

After the saddening news surfaced, Twitter flooded with condolences and grief about the former Foreign minister’s death. Narendra Modi, Lata Mangeshkar, Anupam Kher, Anushka Sharma, Ayushmann Khurrana and many others grieved the death of the politician. Take a look at what these celebrities had to say.

Sushma Ji was a prolific orator and outstanding Parliamentarian. She was admired and revered across party lines.

She was uncompromising when it came to matters of ideology and interests of the BJP, whose growth she immensely contributed to.

Deeply shocked and saddened to hear about Sushma Swaraj ji’s sudden demise.
A graceful and honest leader, a sensitive and selfless soul, a keen understanding of music and poetry and a dear friend. Our former external minister will be remembered fondly.

Saddened to hear about the sudden demise of Sushma Swaraj ji . May her soul rest in peace ?

We are saddened to hear about the untimely demise of Smt Sushma Swaraj. Our condolences to her family and loved ones. pic.twitter.com/T9wg739c8i

Deeply saddened that Sushma Swaraj has passed away.Inspite of political differences we had an extremely cordial relationship. I was 1 of her Navratans as she called us during her I and B ministership and she gave industry status to film. Articulate sharp and accessible. RIP

Deeply saddened by Sushma ji’s demise.The Music Fraternity will be indebted to her for magnificent defence of their rights in the Lok Sabha . You were an exceptional person Sushmaji. We will always remain thankful to you.

You stood tall amongst giants… #SushmaSwaraj ji .. we will miss you #WomanPower ???? #Respect #Rip pic.twitter.com/KVXjbCDiXB

#SushmaSwaraj ji, may your soul rest in peace. ??

RIP Vidya Sinha: The Fragnance of Rajnigandha Is Subdued Tonight

My sincere condolences on passing away of #Sushmaswaraj ji. One of the finest leader of our country.She was special and we will miss her.Sending my prayers to family and friends. pic.twitter.com/BeYy6S9TmN

I hail from Ambala Cantt, same as Sushma Swaraj ji. Always felt proud that a woman from our small town made it big, and made a difference. Sushma ji rest in peace. You inspired me on a personal level. #RIPSushmaSwarajJi

An Iron Lady who was not only a true patriot but an incredible inspiration for each and every one of us. An epitome of women empowerment and leadership.#SushmaSwaraj ji you will be missed and remembered forever. My deepest condolences and prayers to the family ?#RIPSushmaJi pic.twitter.com/OLrXJMuf0X

RIP #SushmaSwaraj ji. May her soul rest in peace

RIP #SushmaSwaraj ji. She epitomised dignity, commitment to democratic norms, grace in politics. A brilliant parliamentarian, a fine bilingual orator, a humane foreign minister- she was inspiring. I differed with her ideology, but greatly admired her resolve & work ethic. ????

A force of nature she was. Too young to go. Saddened to hear this untimely news. A nation’s loss. #SushmaSwaraj #RIPSushmaSwaraj

Putting beside the condolences and grief, I offer my salute and my sincere love of the Great Lady who held up India and Indians, boldly and gracefully in her natural style, that yes, I am India. And that can only define Sushma Swaraj. After a long time feeling a loss of my own.