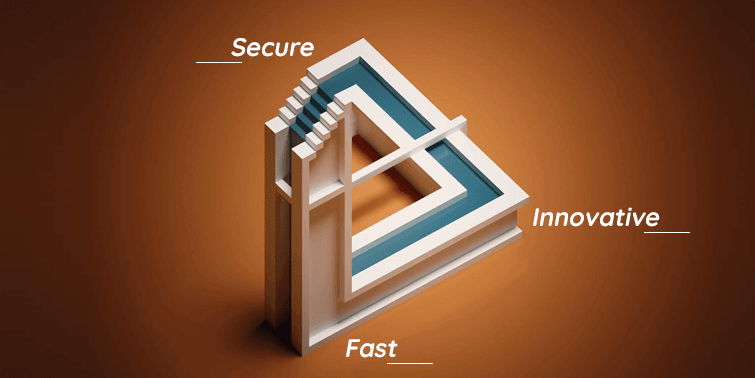 Security Groups, Firewalls, VLANs and ACLs: Contemporary organizations are screaming for IT to offer velocity and ingenuity. It has illustrated security groups and fueled legacy security models to their juncture of a kick. Are we being condemned? Actually, we’re not at all. There is a cybersecurity model that fits the agile, streamlined requirements of modern enterprises perfectly. This model is one which will make us more secure and more standards compliant; it’s easier to administer and enables even greater speed and innovation.

The puzzle is one of the enterprise demands for speed and innovation versus secure computing. Cyber evangelist Tricia Howard describes the dilemma as a Penrose Triangle, also known as the “Impossible Triangle.” First drawn by Swedish artist Oscar Reutersvärd in 1934, this Escher-like optical illusion gives the impression that the top point of an equilateral triangle is farther away than the other two points.

Howard likened it to the enterprise IT dilemma where Speed (bottom left) and Innovation (bottom right) make Security (at the top of the triangle), look all but impossible to balance. While many organizations face precisely this problem, a solution is in fact very achievable.

A key component today of many security environments is some form of segmentation that isolates network and application components, but traditional segmentation has been unable to adapt to today’s enterprise demands. Today something called ‘software-defined segmentation’ is needed instead.

Meeting the requirements for speed, innovation and security, software-defined segmentation should be a part of any major cybersecurity initiative you may be planning with automated provisioning, management and auto-scaling of workloads.

Businesses see IT as a critical competitive delineation. It has the power to accelerate business deliverables, reduce costs and smooth supply chains. IT has responded with a DevOps/Cloud model approach.This incorporates two essential things:

Traditional segmentation provided via firewalls, VLANs and ACLs on premise to virtualized firewalls, and security groups in cloud environments has crippled IT as of late. They do not fit into the new DevOps/Cloud based models that has done so well for other portions of IT.

These legacy segmentation solutions were built for yesterday’s IT environments where well established a perimeter based cybersecurity existed, changes were infrequent and attacks were much less sophisticated than those typical of today. These traditional methodologies are now failing for several reasons:

Today’s security solutions must be decoupled from underlying platforms and operating systems and provide uniform visibility, management and granular control/enforcement. Segmentation must also be DevOps/cloud model automatable and auto-scalable.

It must be readily incorporated into existing playbooks and scripts allowing for a “done once, done right” approach. In that way, software-defined segmentation will allow us to achieve the Penrose Triangle where speed, innovation and security not only coexist but prosper.