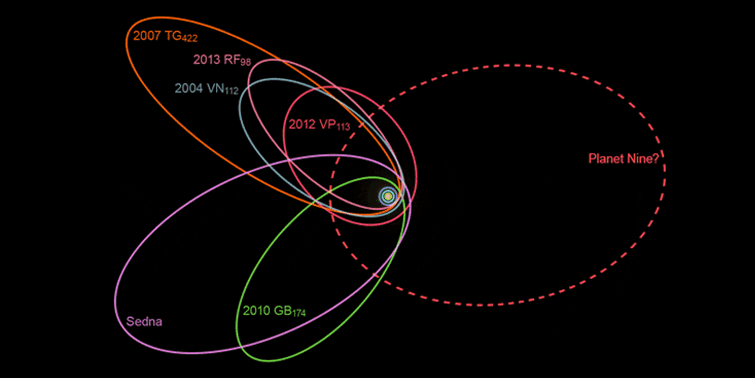 Planet 9: Sounds like a conspiracy theory the minute you read it, doesn’t it? This is especially the case if you’ve been exposed to sci-fi conspiracy theories such as Planet X or the Nibiru hoax in the past. Rest assured, however, that the planet 9 hypothesis is certainly based on observable science, and though it very well may be wrong, or the observations might eventually be explained away using another hypothesis, it is still a distinct possibility that planet 9 exists. Let’s start at the start, though.

For decades, astronomers have been searching beyond the orbit of Neptune for large planetary-sized bodies. The discovery of Pluto way back in February of 1930 was based on observations of the orbits of Uranus and Neptune. Discrepancies in the expected and observed orbits led scientists to think that there were probably more ‘planets’ out there.

When Pluto was discovered, it was known that it was too small to explain the differences in the orbits of Uranus and Neptune, and thus, the search continued. It wasn’t until much later (2005) that we would discover Eris, which started the debate over what a planet was.

Since Eris was actually more massive than Pluto, if we considered Pluto a planet, we’d also have to consider Eris a planet. Pluto actually occupies more volume than Eris, and so in that sense is ‘bigger’, but physics prefer to measure using mass because it is mass that we use to measure gravitational attraction. Eventually, both Eris and Pluto were classified as dwarf planets and the planet count of the solar system went back to eight.

As the years went by, more and more trans-Neptune objects (TNOs) were discovered, and then their orbits were plotted, and it soon became apparent that there were actually some discrepancies in those orbits as well.

When computer simulations were done, it was discovered that one of the simulations that explained the observations was a large planet that was up to 10 times as massive as Earth, and orbiting the sun about 400 to 800 astronomical units (1 AU is the average distance between the Earth and the sun).

Now, to be clear, this is a hypothesis, and there are other explanations possible as well. For one thing, it’s a lot easier to simulate and calculate complex things like orbits using a single, large planet, instead of multiple smaller bodies that may have the same effect but with wildly different orbits. This is an idea that was worked upon by a couple of researchers recently and yielded nearly similar results to Planet 9.

In a study released in January, two researchers, Antranik A. Sefilian from Cambridge University and Jihad R. Touma from Beirut University, have developed a model that calculates the gravitational effects of a disc of smaller objects with a combined mass that’s equivalent to the mass of Planet 9.

The model was successfully able to match what we’ve observed in terms of orbits of all known eTNOs (extreme trans-Neptunian Objects), and thus is another viable hypothesis. The problem is, planet 9 has never been observed (because of how far it is), and neither has this disc of smaller objects (because of how small they might be).

The only way we’re going to find out for sure is if we send something out there capable of observing either of the two hypothesized solutions. Of course, we might find that the true answer lies somewhere in the middle, and perhaps there is both a disc as well as a much smaller planet 9, but as it stands, we simply just do not know. Once again, it’s time to walk beyond the unknown, i.e. Lygometry!