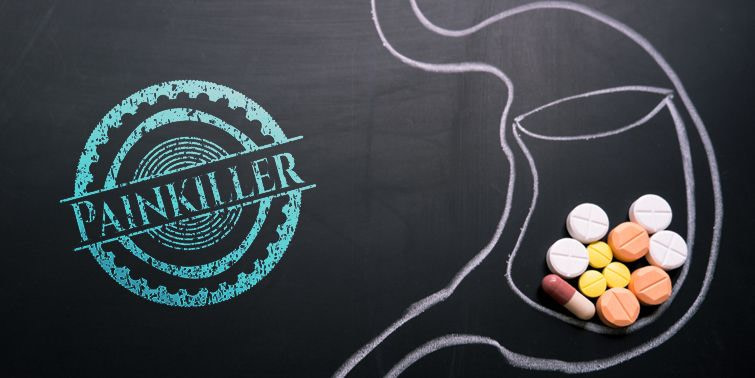 ‘Painkillers or Mankillers‘, my father uses this phrase till now, and it is a fact that we do not understand the reason. A quick relieve can lead to some worst nightmares we can think of. Swallowing a pain killer is some of the most popular ways of treating a home pain. The far more effective solution of painkillers, would seem to be ranging from a toothache and period pain to arthritic pain.

However, using these medicines more often than not is not a good idea as it might lead to health complications and side-effects. Here’s more on the types of painkillers, their mechanism and common side-effects (if any) you need to know.

There are three common types of painkillers:

Also known as acetaminophen, paracetamol is one of the commonly used analgesics to control fever. However, this medicine is also used to relieve pain along with being the first line of treatment for high body temperature.

How does it work: The exact action mechanism of this class of drug is still debated. However, it is believed to inhibit the synthesis of prostaglandins in the central nervous system (CNS). Prostaglandins are hormones which are released at the site of injury or infection and play a key role in controlling inflammatory response.

Side-effects: It is one of the best tolerated medicines. However, side-effects such as allergies are reported in certain cases. But an overdose of this medicine can lead to liver damage (hepatotoxicity).

Hence, always consult your doctor before taking this medicine to know the right dosage and prevent its side-effects.

NSAIDs painkillers are generally used for treating fever, pain and swelling. But they do not contain steroids, unlike other anti-inflammatory medicine. These drugs are the largest group of (OTC) or over the counter painkillers used to treat various types of pain such as a headache, a toothache, and menstrual cramps.

How does it work: NSAIDs inhibit the action of the enzymes known as cyclooxygenases or COX enzymes, which play a key role in the production of prostaglandins. However, these drugs are non-specific in their action.

Side-effects: The main safety concerns to be aware of when using NSAIDs are complications with the gastrointestinal tract, kidney, heart, blood, liver and allergic reactions. This is primarily due to the fact that these drugs suppress the action of the enzyme COX-1 affecting the GI tract. These medicines can also interact with different medicines.

These drugs are commonly used as over-the-counter (OTC) medicines to treat pain and fever. However, taking NSAIDs is shown to increase the incidence of a heart attack and stroke. Hence, avoid using these drugs without your doctor’s advice.

How does it work: This class of drugs acts by suppressing the neurotransmission in the central nervous system, which helps in alleviating pain. This is achieved due to the binding of the drugs to the opioid receptors, more specifically μ receptor, present in the brain.

Side-effects: The use of opioids has increased significantly over the last decade and thus, the frequency of adverse drug reactions. The most common side effects of opioids include constipation, nausea, vomiting, sedation, urinary retention, pruritus and depression.

Since these medicines are used mostly for chronic pain management, the risk of opioid dependence has expanded, leading to their abuse and misuse. This is why you check with your doctor about the pros and cons of these drugs before use to prevent dependence on these drugs.