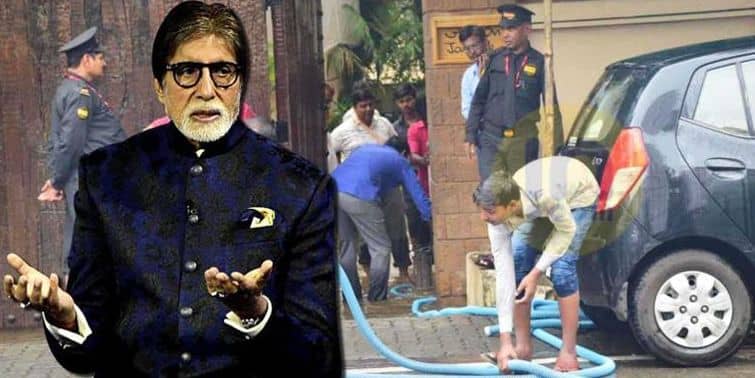 Mumbai Monsoon Exclusive: It’s that time of the year when Mumbai slows down, thanks to the heavy downpour of the famous… actually now infamous – ‘Mumbai Monsoon.’ For four days now the rain Gods have been in no mood to spare the city from their wrath. Many low lying areas have been affected and at least one Bollywood Super Star has had a difficult few days – Amitabh Bachchan.

The area around Amitabh Bachchan’s bungalow (Janak) in Juhu was flooded in the morning today (2nd July). The water, for now, has depleted from the streets around the house, however the downpour was so much that it entered the premises of the bungalow. In the exclusive video we can see how the Brihanmumbai Municipal Corporation (BMC) workers are trying their best to drain out the water from the compound of the bungalow.

Seen in the video and the pictures, this is Bachchan’s Janak bungalow which the senior actor uses as his office space. It is the very place where the actor invites the media for his birthday celebrations as he hosts a press conference and does a meet and greets with the journalists and his fans.

The ground floor of the bungalow has high-end cars parked in the parking lot. It also has furniture in the open seating area. There is also a small mandir right next to the main gate. Also, there are many posters and family photos that are framed in the open area of the bungalow.

With the rain sparing the city for the time being, we hope the water gets drained, before it proves to be hazardous for the property which is a treasure of all things precious and valuable