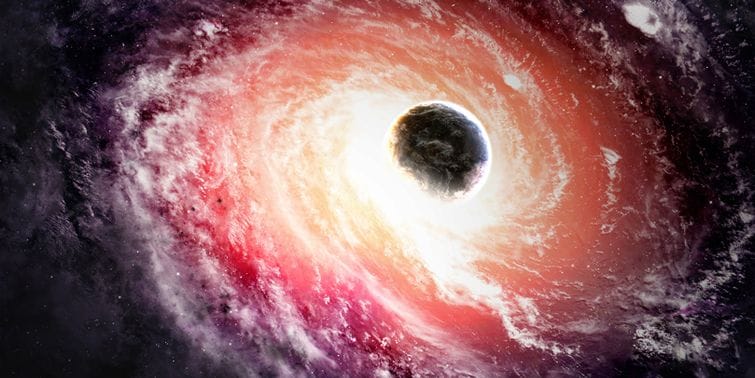 Black Hole or Black holes are the strangest and the most fascinating objects in outer space and as well as Mysteries Of Human Knowledge. A lot has been said about these matters-sucking entities in the past, but only a little is actually known for real. Black holes are the most powerful space bodies in the universe that we know of. So, can Earth fall into a Black Hole in the near future?

They produce the ultimate gravitational pull that even for the fastest traveling electromagnetic radiation, just like light, is impossible to escape. That’s why, we don’t just look at the sky and be like, “Hey, look, there’s a black hole!”

Which is why, any object cruising through space cannot afford to get very close to a black hole. This no-return point is called ‘The Event Horizon.’ What is essentially a region of a great amount of mass packed into a very small area, a black hole is formed by the collapse of a massive dead star whose core becomes unstable and gravitationally falls inward upon itself.

Another reason that proves black holes are nothing, but gargantuan, monstrous singularities are the ‘spaghettification’s phenomenon. Imagine if an object in space says, a star, gets too close to a black hole, one side of this star would be pulled harder.

The gravity will tug at either side of the star, and weaker on the other one that’s away. The difference in the pull of gravity, aka tidal force, would cause the star to be ripped apart.

The black holes will turn the star into spaghetti strips. Imagine pulling a lump of pasta dough into spaghetti. Yeah, just like that!

Subscribe to Naked Science – http://goo.gl/wpc2Q1 Every other Wednesday we present a new video, so join us to see the truth laid bare… The defining feature of a black hole is the appearance of an event horizon, a boundary in spacetime through which matter and light can only pass inward towards the mass.

As for Earth, we don’t need to worry. The reason being the vast distance between our home planet and the closest black hole that we know as of now.

It really has a great deal of mass – the black hole is 6.6 times more massive than our Sun, which is why, it may have an even greater gravitational pull than the Sun.

For Earth, to be torn apart by V616 Monocerotis, it will be required to venture 800,000 kilometers around this black hole. But that is highly unlikely to happen, at least not in this lifetime. Once again, it’s time to walk beyond the unknown, i.e. Lygometry!