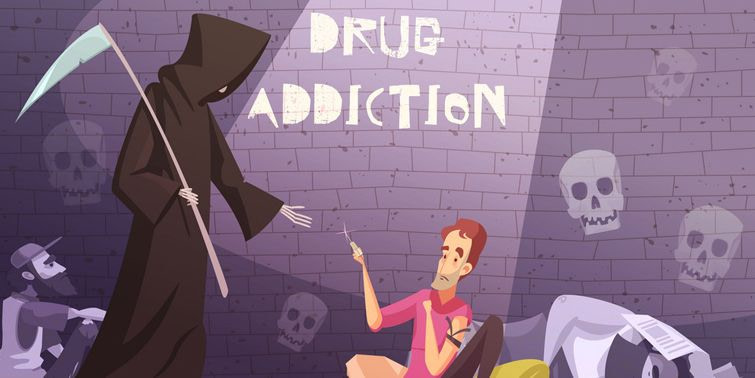 Anti-Drug Addiction: The grave consequences of drug addiction on youth and how it affects them both physically, mentally and emotionally. Unlike popular belief, drugs are not-at-all cool, but one of the greatest evils of a society that we should take note of.

It’s high time we learn about the health effects of drug addiction and how it impacts not just the person in question, but also his family, friends, relatives, and society at large.

What Is A Drug Addiction?

In simple terms, drug addiction is a complex condition in which a person becomes a slave to the drugs. It is characterized by a strong will to seek and use drugs, which is difficult to control. In most cases, the initial decision to take drugs is voluntary in nature which is mostly for fun or out of curiosity.

However, repeated use of drugs (known as drug abuse) can change the way the brain functions. This overtime can interfere with a person’s ability to take informed decisions and make choices, including their ability to resist the urge to take drugs.

Types Of Drugs And Effects Of Drug Addiction

Stimulant drugs such as cocaine and amphetamines show a greater impact on the release of excitatory neurotransmitters. These brain chemicals are known to keep you awake and can lead to drastic mood changes.

Depressant drugs like alcohol and heroin work by activating the inhibitory neurotransmitters. These drugs affect both mood and personality. So over time, you may need higher doses of the drug to produce the desired effect which explains your dependence on the drug.

Hallucinogenic drugs such as LSD and magic mushrooms are the ones which impact the brain areas that control perception and thought process. They alter the mechanism through which messages are received and interpreted.

Dual-action drugs have a complex action mechanism. These drugs are known to make a person happy and increase their feelings of empathy by acting as a stimulant.

Some of the common physical and mental effects of drug addiction are drug addicts:

Psychological and social changes include:

Drug Addiction Treatment: What You Need To Know?

The use of drugs is not at all fun as these are not meant for the experiment. People try to experiment with drugs either out of curiosity or to be a part of a social circle. Some also use it to enhance athletic performance while others succumb to peer pressure.

The problem arises when a person gets addicted to drugs such that they tend to lose the ability to make rational decisions and always look for that fix when then feel low or wake up.

In such a case, drugs become a necessity to function rather than acting as an aid to help get out of a condition or a situation. You become a drug addict if it interferes with your personal, professional or social life. Here are some of the tips to deal with drug addiction.

Conclusion
Drug addiction is difficult to deal with and getting out of it is difficult but not impossible. The treatment approaches should be tailored as per the drug use patterns and medical, mental, and social problems prevent relapse.

With support from your loved ones, support groups and rehabilitation centers, it is possible to come out of this vicious cycle of drug abuse and get back on track. However, one should remember that drug use and addiction are preventable.